A hidden plumbing leak is one of the things that can happen in any home, and it may be too late for homeowners to discover that the plumbing leak is hidden. Understanding the signs and symptoms of hidden plumbing leaks, detecting Hidden plumbing leak, and water pipe leakage methods will help you to get to this problem as soon as possible. This way, in addition to stopping leaks, saving water and preventing the amount of water consumed, you will also prevent damage to your home. In this article, we will discuss the issues related to the hidden leakage of domestic water piping. 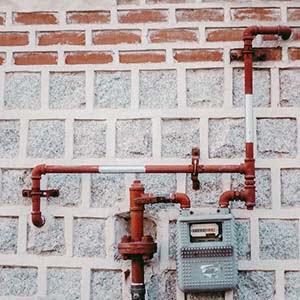 To solve the hidden plumbing leakage problem, you must first be sure that your home plumbing is leaking. Some drips are simple and small and you can easily find the source of this drain, such as toilet drain, shower head or water taps. But some leaks are also hidden, which we call hidden leakage, and the damage they cause is far greater. Because they damage the building, you should take action to reduce the damage and costs. Usually, the way to detect sewage pipe bursts in these hidden cases is through specialized devices and methods.

Hidden plumbing leak: Detects leakage of water from the meter

Water and moisture and moisture leakage of the pipe provide a great space for mold and mold growth on the walls. Because mushrooms and mildews grow very quickly in dark, humid environments. So if you see fungus or mold and moisture on the walls, especially if it was a wall that was not attached to the bathroom wall, you are very likely to find a hidden plumbing leak at home and you may have a problem with leaking water pipes You have to leak water pipes.

If you constantly hear the sound of water dripping at home but can’t find the source, there is a high probability of water leaks in some parts of the house. However, usually in this case, the leakage of the water pipes is difficult and the pipe burst detection must be performed.

How to identify the location of the water pipe leak?

If you are sure that you have a water leak, the next step is to determine whether it is indoors or outdoors. How to detect internal or external sewage pipe bursts is that you must first close the household water tap. Usually, this valve is located in the parking lot or in the parking lot. In the same way, re-read the number on the water meter and double-check it again within a couple of hours (make sure no one inside the house is open during this time).

If the water meter stopped moving and there was no change, the water would be indoors.

But if the water meter continues to move and changes

and water pipe leakage has occurred between the meter and the house.

In the old method of detecting a Hidden plumbing leak, based on signs and symptoms, several locations in the house or buildings that were suspected of leaking and pipe bursting were demolished to finally identify the main source of leakage. Although these sites were based on the expertise and expertise of experts, however, due to the lack of new technologies for leaking water pipes, inevitably several areas were inadvertently demolished and thus costly and costly. It was very high for people.

Leakage of water pipes without destruction

Advances in technology and new methods in detecting leaky plumbing leaks have also been instrumental.

With the advent of new technologies

and instead today, pipe leakage is utilized with a dedicated, non-destructive device.

In fact, there are a variety of specialized methods for leaking water pipes, all of which use leak detectors.

and pipe trapping, pipe breakage and freezing of water pipes in winter.

Pipe leakage: With the infrared device

How to Detect Sewage Tube Bursting in the Infrared Pipe Leak Detection and Hidden Plumbing Leak method, in that the leak detector detects the exact location of the Hidden Plumbing Leaks leak by receiving its own infrared waves through its receiver and transmitter. This device is particularly useful for detecting deep-water pipe leakage.

use of nitrogen/hydrogen gases to leak water pipes

and use of endoscopic cameras to detect leakage of hidden pipes

all included Other advanced methods are to detect pipe bursts with the device.

All of these methods of pipe leakage and Hidden Plumbing Leak with the device each have their own advantages and disadvantages!

But in any case, they are superior to the traditional method of detecting sewage pipe explosions

Because the location of the leak is precisely at one point
And no extra cost and demolition are needed for the homeowner.